The TED conference, started in 1984, has become the standard bearer for hosting insightful talks on a variety of important subjects. They have made videos of over 1,900 of these talks freely available online and they have been watched more than a billion times! In 2009 they extended the concept to “TEDx Talks”in the same format but hosted by independent organizations all over the world.

On January 6, 2016 Mountain View High School hosted a TEDx event on the theme of “Next Generation: What Will It Look Like?”. They invited both students from the school and external speakers to present. I spoke on “What’s Happening With Artificial Intelligence?”. A video of the talk is available here:

and the slides are available here:

I talked about the multi-billion dollar investments in AI and robotics being made by all the top technology companies and the 50 trillion dollars of value they are expected to create over the next 10 years. The human brain has 86 billion neurons wired up according to the “connectome”. In 1957 Frank Rosenblatt created a teachable artificial neuron called a “Perceptron”. Three-layer networks of artificial neurons were common in 1986 and much more complex “Deep Learning Neural Networks” were being studied by 2007. These networks started winning a variety of AI competitions besting other approaches and often beating human performance. These systems are starting to have a big effect on robot manufacturing, self-driving cars, drones, and other emerging technologies. Deep learning systems which create images, music, and sentences are rapidly becoming more common. There are safety issues but several institutes are now working to address the problems. There are many sources of excellent free resources for learning and the future looks very bright!

Eileen Clegg did wonderful real time visual representations of the talks as they were being given. Here is her drawing of my talk: 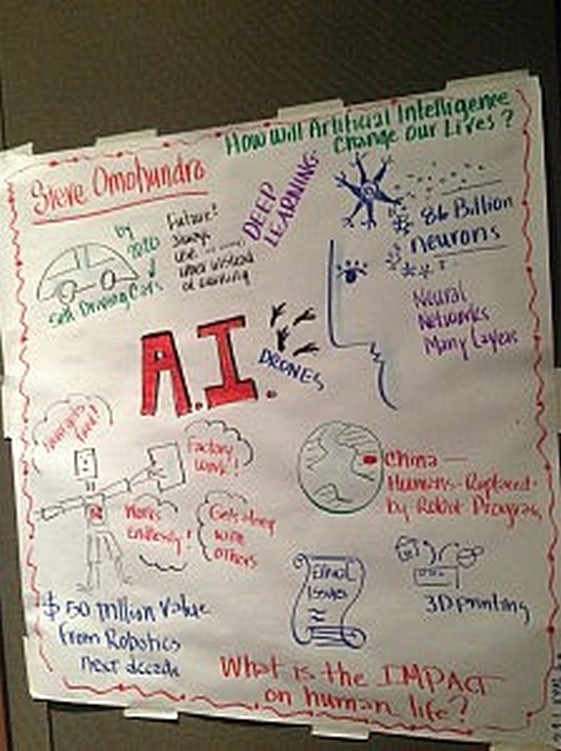 Each year Edge, the online “Reality Club”, asks a number of thinkers a question and they publish the short essay answers. This year the question was “What do you consider the most interesting recent scientific news? What makes it important?” The responses are here:

My own essay on “Deep Learning, Semantics, And Society” is here: